The new addon that allows you to easily, reliably and faithfully import Scalable Vector Graphics (SVG) assets into Moho Pro – ready for presentation and animation.

SimplSam’s SVG Import is a Moho Pro addon tool that allows you to import to Moho Animation whilst retaining Colors, Look & Feel and Layer structure.

The tool was developed as an upgrade/replacement to the existing built-in SVG import process, and provides a range of enhanced features to improve 3rd party SVG application compatibility and end-user productivity.

So … Why do you need the SVG Import tool?

The tool allows for a much greater range of vector based Characters, Props, Scenery and Artwork to be imported directly into Moho – allowing you to faithfully reproduce, manipulate and incorporate artwork from Illustrator, Inkscape, Affinity Designer, CorelDraw, P and many other graphics/designer tools and SVG image repositories.

Some of the shortcomings of the built-in tool were its inability to fully support Grouping, Masking, CSS Styles, Short hex colors (#000), Use referencing and Arcs. Many of these features are used frequently in SVG imagery – which previously could lead to disfigured or discoloured artwork – or imported assets which failed to retain any grouping / layer structure or element naming.

Mashed Up example: car.svg image file imported with the default tool (Picasso would be proud). When the asset was imported with new SVG Import tool, the SVG image was more faithfully reproduced. 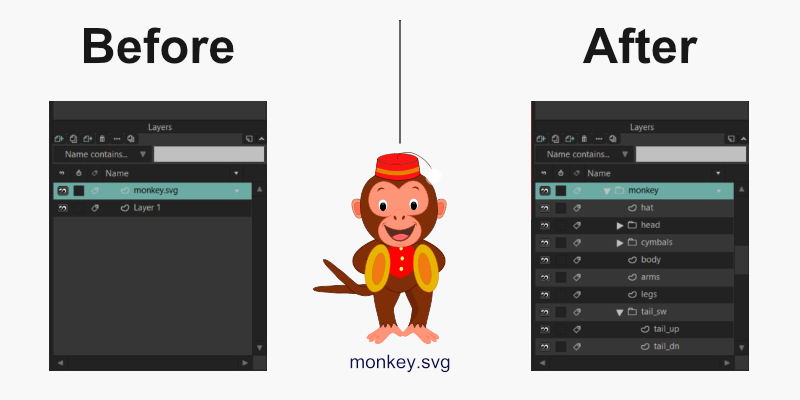 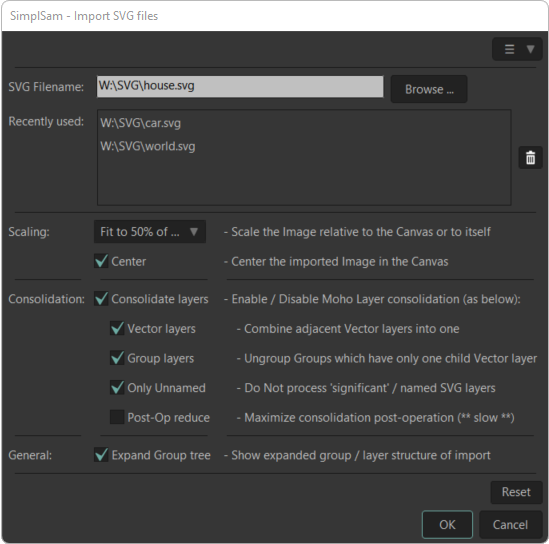 There is an additional Preference settings menu (top right) which allows you to:

The tool was designed to enhance the Moho SVG import capabilities whilst supporting most common SVG 1.1 features and respecting SVG grouping. The tool is not and never will be 100% SVG 1.1 compliant, and as such has some limitations: